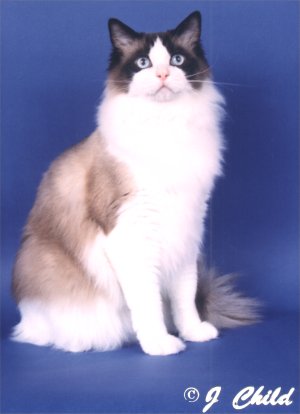 It is a cute and funny story how Jazzy Jewel came to be Jazzmania's first "king" and found his way not only into my cattery, but into my heart. When first starting my breeding adventure in 1996, I purchased a beautiful seal point female by the name of Angel from Gail, my breeder mentor. Right from the beginning, my intent was to adopt just one or two girls with no plans to either purchase or house a whole male. Condo living was not conducive to a large cattery nor was there appropriate space to house a whole male. The possibility of purchasing a male was really not discussed again after adopting Angel.

A year or so into my breeding program, Gail sent a letter stating that she had a beautiful seal bi-color male kitten. She had included some kitten pictures of him and said she had named him Jazzy Jewel after me (my DJ trade name was Jazzy Joyce) and she inquired when I wanted to pick him up ....... not even an option for discussion. And I never really considered turning her (or Jazzy) down.

And this is how the handsome Jazzy came to be a part of my home and heart and how my cattery came to be named “Jazzmania.” He turned out to be perfectly marked, demonstrated perfect ragdoll “type” and had the purr-fect ragdoll personality – very loving and affectionate – adoring attention from anyone and always throwing himself upside down on the floor for a belly rub. And a bonus……..he never sprayed, very unusual for a whole male, so was always permitted full run of the house. As the years passed, he produced many beautiful, healthy kittens and almost without fail, when a customer would visit to choose a kitten, they would beg to take Jazzy home too. It was always a joke that if someone adopted Jazzy, it would be impossible to produce the beautiful ragdoll babies that everyone so loved!!

And so it went ... Jazzy remained very playful into adulthood and would go on “tears” running through the house, stampeding up and down the steps or racing down the hall, growling like the devil was after him and then turning around to see if I was paying attention – he was so funny! He also had a most unusual “meow” and could carry on a conversation anytime just like he was human. And then there were the lazy winter evenings when he would curl up in my lap in front of the fireplace, covering my face with his wet, loving kitty kisses and purring like there was no tomorrow.

Sadly, tomorrow came. In February of 2006, Jazzy seemed a bit quiet. Then again, he was 9 years old so was perhaps mellowing a bit with age. One day when I picked him up (and he was BIG boy at 16+ pounds), his belly felt unusually hard so decided to take him to the vet for a check – perhaps he was constipated. After an x-ray and an ultrasound, there was no definitive diagnosis although there was something very apparently wrong and Doc recommended exploratory surgery. He called while Jazz was still under anesthesia and explained that cancer was rampant throughout his intestines and bowels and that the only humane option was to put him to sleep. All of this in 48 hours and no chance to say goodbye. I was just devastated and in shock – how could this be happening to beautiful Jazzy who had been with me almost from the beginning? There wasn't much of a choice and the decision ripped my heart out. To this day, there is a hole in my heart where Jazzy once was. Time goes on and there are lots of other wonderful kitties who have been a special part of my heart and home but there will never be another like my beautiful Jazzy Jewel. I look forward to seeing him one day again ……. at the RAINBOW BRIDGE.

Just this side of heaven is a place called RAINBOW BRIDGE.

When an animal dies that has been especially close to someone here, that pet goes to RAINBOW BRIDGE. There are meadows and hills for all of our special friends so they can run and play together. There is plenty of food, water and sunshine, and our friends are warm and comfortable.

All the animals who had been ill and old are restored to health and vigor. Those who were hurt or maimed are made whole and strong again, just as we remember them in our dreams of days and times gone by. The animals are happy and content, except for one small thing; they each miss someone very special to them, who had to be left behind.

They all run and play together, but the day comes when one suddenly stops and looks into the distance. His bright eyes are intent. His eager body quivers. Suddenly he begins to run from the group, flying over the green grass, his legs carrying him faster and faster.

You have been spotted, and when you and your special friend finally meet, you cling together in joyous reunion, never to be parted again. The happy kisses rain upon your face; your hands again caress the beloved head, and you look once more into the trusting eyes of your pet, so long gone from your life but never absent from your heart.

Then you cross RAINBOW BRIDGE together.......


All content on this page and the pages linking from it are copyright © Joyce Houser. All rights reserved.